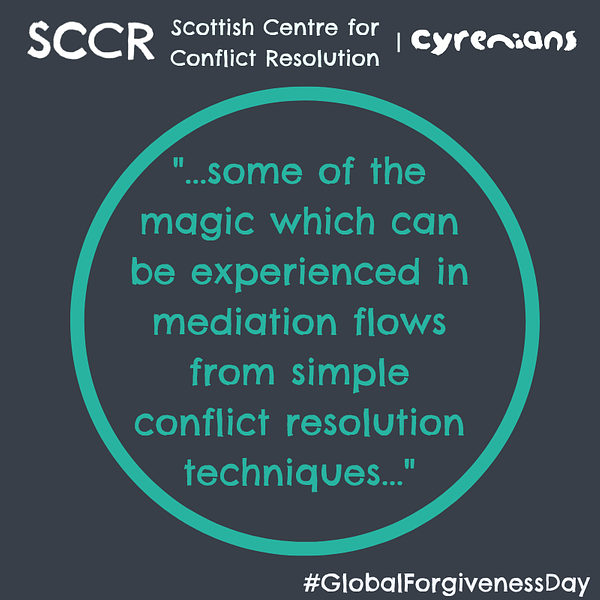 Most of the work I do centres around dispute resolution – as a researcher, a tribunal member and as a mediator. I am currently working on a project about the impact there can be on staff members when they are complained about by service users, and what practical advice could be provided to help with this. And this has led me to thinking about why people forgive each other – and to reading a recent paper ‘The critical role of customer forgiveness in successful service recovery’ by University of Houston academic L. Jean Harrison-Walker.

This paper considers that forgiveness is one of the relatively few universal virtues and that it can be described as a deliberate process that transforms a vengeful negative response into a positive one. So forgiveness is a response to unfairness that involves the lessening of resentment or anger towards the offender and the initiation of more positive feelings, thoughts and behaviours towards that person.

What this article looked at was the effectiveness of different recovery strategies offered by restaurant and healthcare service organisations to their dissatisfied customers. The strategies examined were apologising, offering compensation and allowing customers to voice their concerns. And the purpose of this research was to find out which strategy most effectively reduced negative word of mouth and led to long-time customer retention.

The research found that in the restaurant industry both apology and voice led to customer forgiveness, but that only voice proved effective as a strategy leading to forgiveness in healthcare. So for both types of services it was important for the customer to have a voice and express their feelings. The conclusion reached was that customers needed to feel that their concerns and frustrations had been heard in order to forgive the service provider.

These findings echo my own experience as a mediator. And in his 1993 article ‘Revenge, Forgiveness, and the Magic of Mediation’, Kenneth Cloke said that “As a mediator, I often encounter parties whose anger has become a force more powerful than self-interest, especially in cases involving shame or humiliation. I have tried to find ways of releasing them from vengeful, self- harming behavior by creating an alternative in forgiveness and reconciliation.”

What Kenneth Cloke goes on to say in his article is that some of the magic which can be experienced in mediation flows from simple conflict resolution techniques which are commonly used by mediators in all cultures. These include having the parties move through the following steps

– expressing their anger or desire for revenge;

– listening to each other;

– stating their perceptions of what happened;

– understanding the other person’s motives;

– hearing each other’s stories and creating a mutually acceptable, integrated version of what happened;

– recognising what they have in common;

– saying what they need in order to let it go;

– apologising for what they did, both to each other and to themselves; and

– allowing themselves to let go of their anger and desire for revenge, preferably through some form of ritual.

Kenneth Cloke also says that forgiveness is not simply a result, but a process, a letting go of the past and an opening to the future. And that “The mediator helps both parties imagine forgiveness, then creates a path that leads there, step by step.” Wise words indeed and still very relevant today.